DAP vs. DDP Incoterms: Which One Should You Choose in 2022? 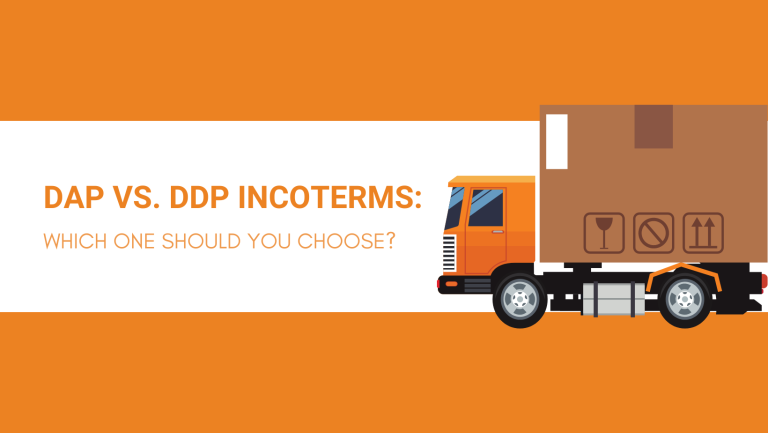 If you’re interested in learning more about DAP vs. DDP, you’ve landed on the right spot. The International Chamber of Commerce or ICC established 11 different Incoterms, and DAP and DDP are two of them.

The DAP and DDP Incoterms are the two trade agreements that are the most beneficial for the buyer. Under these Incoterms, almost all costs and risk fall on the seller.

So, is DAP or DDP the best choice for buyers?

Let’s jump in and see!

What Is DAP Incoterms?

DAP stands for Delivered At Place. Knowing this, we can define DAP Incoterms as a trade agreement between the buyer and seller that places the majority of the risk and responsibility on the seller. DAP can be used for any mode of transport.

Under DAP terms, the seller is obliged to deliver the cargo at the named place of destination, which is usually the buyer’s port.

With a DAP agreement, the seller covers the shipping costs and export customs duties and taxes. The buyer covers only import duties and unloading at the final destination.

Under DAP, the largest part of the costs and risk is placed on the seller:

The buyer’s responsibilities start once the seller delivers the goods at the named place:

What Is DDP Incoterms?

DDP is a shortcut for Delivered Duty Paid. DDP Incoterms is an agreement between the buyer and seller that places all the costs and risks on the seller. DDP Incoterms can be used for all transport modes.

With DDP shipping, the seller has maximum responsibility and has to deliver the goods at the named place of destination in the buyer’s country. The greatest difference between DAP and DDP is that under DDP, the seller is also responsible for import duties and taxes.

Under DDP Incoterms, the seller carries maximum responsibilities and costs:

The buyer has minimum responsibility under DDP Incoterms:

These are the only two responsibilities a buyer has under DDP. However, if the seller doesn’t have any experience with the import procedure in the buyer’s country, the buyer often has to help them.

DAP Pros and Cons for Sellers

Let’s start with the advantages and disadvantages of DAP Incoterms for sellers:

DAP Pros and Cons for Buyers

Now, let’s take a look at the DAP advantages and disadvantages for buyers:

DDP Pros and Cons for Sellers

Next, let’s see all the benefits and disadvantages of DDP for sellers:

DDP Pros and Cons for Buyers

Last but not least, let’s look at the pros and cons of DDP for buyers:

To simplify the comparison of DAP and DDP, let’s take a look at their features:

DAP – the seller is responsible

DDP – the seller is responsible

DAP – the seller is responsible

DDP – the seller is responsible

DAP – the buyer is the importer on record

DDP – the seller is the importer on record

FAQs about DAP and DDP

It’s time to bring more clarity and dive deep into the subject. Let’s take a look at some of the most frequently asked questions on DAP vs. DDP:

DAP Incoterms stand for Delivered At Place. Under DAP shipping terms, the seller takes responsibility, liability, and covers all costs up until import and unloading at the final destination.

DAP can be used for any mode of transport, not just sea and inland waterway.

What Is DDP Shipping?

DDP shipping means trading internationally under DDP Incoterms. Under DDP, all risks, responsibilities, and costs (including import) except unloading at the final destination are placed on the seller.

Is DAP Better than DDP?

Generally speaking, DDP places more responsibilities and costs on the seller than DAP.

However, DAP can be useful for determining your real product pricing. With DAP, you can calculate all your costs and come up with a genuine way to determine your sales product pricing.

Are DAP and DDP the Same?

The only thing the seller won’t cover under DDP is the unloading at the final destination.

Are DAP and CIF the Same?

No. DAP stands for Delivered At Place, while CIF stands for Carriage, Insurance & Freight. DAP is used for all modes of transport, while CIF is only for sea and inland waterways.

Finally, DAP covers unloading, carriage, and delivery to destination, while CIF seller responsibilities end with paying freight and insuring the cargo on board.

Does DAP Include Customs Clearance?

Under DAP Incoterms, the seller takes care of export duties and customs clearance, and the buyer covers the import.

Does DDP Include Customs Clearance?

Yes. Under DDP Incoterms, the seller takes care of both export and import duties and customs clearance.

What Is the Difference between DAP and DDP Shipping?

The two main differences between DAP and DDP Incoterms are:

What Is the Difference between DAP and DAT Incoterms?

DAT stands for Delivered At Terminal, and this is an older Incoterms that’s not that used anymore. DAT obliges the seller to deliver the goods and unload them on the terminal port.

From then on, the buyer takes over the responsibility and covers the import and delivery to the place of destination.

What Is the Difference between DDP and Ex-Works?

Under DDP, the seller is responsible for everything except unloading. Under EXW Incoterms, the seller just needs to provide an invoice and make the goods accessible for pickup at their premises.

DAP vs. DDP vs. CIF – What Are the Differences?

Firstly, DAP and DDP Incoterms are used for all transport modes. CIF, on the other hand, is used only for sea and inland waterway transport.

Secondly, CIF places responsibility on the seller such as main carriage and insurance during transport, but here it ends. Then, the buyer is responsible for unloading, importing, etc.

With DAP, the seller has to deliver the goods to the final destination, but they’re not responsible for the import and unloading.

And, finally, DDP is the most buyer-friendly since it places all costs and responsibilities on the seller except unloading at the final destination.

What Are DDP and DDU?

Under DDP, the seller covers all import duties and taxes as well as all other taxes such as VAT (value-added tax). Depending on the country, the average VAT is usually 15% or higher.

What Are the 11 Incoterms?

The 11 Incoterms are enforced by the International Chamber of Commerce or the ICC, and they get updated every 10 years. They’re a set of agreements for international trade between buyers and sellers, all with different conditions.

Here are all of them:

Yes, with a DDP agreement, the seller is responsible for organizing the import process, customs clearance, and covering all import duties and taxes.

Who Is Importer Under DDP?

The seller acts as the importer on record under DDP shipping terms. For sellers who don’t have any experience importing in the buyer’s country,  the DDP Incoterms might not be the best choice. They could use DAP instead.

Is CIF the Same as DDP?

Not at all. CIF Incoterms is only for sea and inland waterway transport, while DDP can be used for all transport modes. CIF stands for Cost, Insurance & Freight, and it obliges the seller to cover the main carriage plus insurance on board. DDP, on the other hand, stands for Delivered Duty Paid, and it places maximum responsibilities on the sellers.

Under DAP Incoterms, the seller is responsible for organizing the freight and covering the costs for the main carriage.

If you’ve come to the end of this blog, it should now be much easier to choose between DAP and DDP Incoterms.

These two Incoterms place maximum responsibilities on the seller, which could be beneficial if you’re a new buyer.

And, if you’re a buyer who’s never dealt with import before, we suggest you choose DDP and let the seller take care of importing in your country.

If you want to buy and import your first bulk order, get in touch. We’re an expert product sourcing agent in China and we can hold your hand through the entire import process. Take advantage of our free sourcing quote – you have nothing to lose.

If you have any other questions about DAP vs. DDP, we’d be glad to answer them below.

Do you want a good supplier?

We can find you the right supplier to help you start or grow your business.

Now you have a better way of product sourcing

Ready to have the world’s factory at your fingertips? Try us and level up your business now.

Start with a Free Quote

China sourcing agent that helps you save cost, move fast, grow the reputation and build a brand.